The Deimos Virus: Target Earth is now available on Kindle. 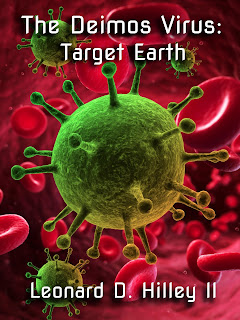 A devastating virus spreads through the Deimos Moon Station killing fifty-six people. Dr. Carter is somehow immune and the sole survivor. Vowing to avenge the lives of his colleagues and his lover, Carter takes two vials of the contagious lethal virus to Earth with the intention to infect and kill Boyd Grayson, the owner of Grayson Enterprises. He holds Grayson responsible for their deaths. His blind vengeance dismisses the fact that there is no cure, placing the entire world population at risk.

Succubus: Shadows of the Beast 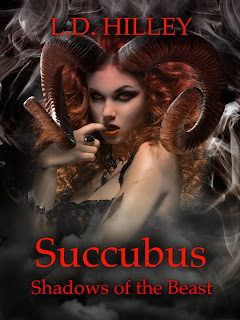 Entering the real world after college often educates one to the true horrors of the harsh obstacles life has to offer. For Kailey Yates the discoveries are far more terrifying and dangerous. Two days before she graduated with a degree in investigative journalism, her brother Vincent is found dead in his swimming pool with a syringe stuck in his arm. His death is ruled as a suicide, but Kailey doesn't buy it.

She suspects Vincent's new wife Cassie is the one who actually killed him. Her suspicions are drawn from his rapid health deterioration during his short six month marriage. During one of her last Skype conversations she had with Vincent, Kailey's roommate Raven witnesses their conversation and immediately senses that Vincent is being soul-drained by a succubus. Since Raven is a witch, Kailey has no doubt about her friend's perception and concludes that Cassie must be the demon responsible.

Kailey leaves Boston and flies to Seattle for her brother's funeral. While there she investigates the circumstance surrounding his death. She uncovers dark information that leads her to Nocturnal Trinity, a nightclub in the heart of Seattle. And worse, the underground club is run by a powerful alliance of vampires, demons, and witches that wish to protect Cassie at all costs, which includes killing Kailey or anyone else if necessary.

For Forrest Wollinsky fans, Book 2 will release on Friday 13th. Here's the cover and blurb: 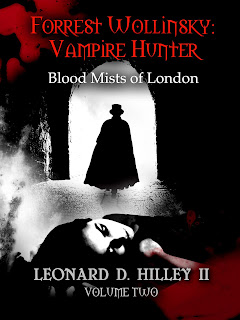 A ravenous madman stalks the foggy streets of Whitechapel, savagely butchering women during the dead of night and mysteriously disappearing without a trace or even an eyewitness, which leaves detectives at wit’s end to find the murderer. The newspapers call this serial killer Jack the Ripper, but Forrest Wollinsky believes this sinister phantom is a master vampire who has ventured far from his homeland for one reason: unrelenting vengeance.

However, stopping this vampire won’t be easy. He’s the most powerful vampire Forrest has encountered to date, and even his werewolf cousin discovers he’s no match against him alone. Slaying this vampire will require Forrest to align himself with some unusual creatures he never knew existed, but even then they have no guarantee of success.

Posted by Leonard D. Hilley II at 4:07 AM No comments:

A Typical Day in a Writer's Life

This is Day 5 in Bewitching Book Blog Tour for Forrest Wollinsky: Vampire Hunter. My guest blog "A Typical Day in Writer's Life" is at: I Smell Sheep. So stop by and check it out. This blog gives some insight to how I start my day and my writing process. Don't forget to sign up for the giveaway at the end of the month for a chance to win 1 of 10 FREE copies of Forrest Wollinsky: Vampire Hunter.

More news is on the way. I've almost completed the first draft of the second book in the Vampire Hunter series: Forrest Wollinsky: Blood Mists of London. I will have a cover reveal soon.

Thank you for stopping by and for your support!

Leonard
Posted by Leonard D. Hilley II at 6:21 AM No comments:

Please check out Day 3 of the Bewitching Book Blog Tour for Forrest Wollinsky: Vampire Hunter at the CBY Book Club Blog. If you haven't already, sign up for the giveaway. 10 digital copies of Forrest Wollinsky will be given away at the end of the tour.
Posted by Leonard D. Hilley II at 8:37 AM No comments:

My wife and I celebrated our 23rd wedding anniversary yesterday. In so many ways, it doesn't seem that long, but I've treasured every day we've been together.

We met at Berea College in 1993, fell head over heels for one another, and married within a few months. Yes, most marriages don't last when the couple hasn't known one another very long. But, I knew from the moment she and I took a walk along the trails on Berea College's campus that she was the woman I wanted to spend my life with. We had so many common interests.

At the time our paths crossed both of us were at very low points in our lives. What we discovered wasn't a rebound, but we found the part that completed us. We're soulmates destined to walk the journey of life together.

Before I met Christal, I had stopped writing for nearly ten years. I had tried a couple of times to put words on the page but without success. After we started dating, she and I went to a bookstore on campus. We were looking at discount books, and she showed me a 3-in-1 set of Dean Koontz's books. She expressed how much she loved his books. So, later in the day, I returned to the store and bought the set to surprise her. Only, the surprise was on me.

When I got back to the dorm room, I started reading The Servants of Twilight. I loved the way Koontz wrote the different chapters from the POV of each character. By chapter four, I was hooked. I had to confess to her that I had bought the book for her, BUT I needed to finish reading the first book first. She laughed. Reading his work refueled my desire to write, which is why the dedication of my first book, Predators of Darkness: Aftermath states: "For my wife, Christal, who reignited my desire to write. Without her this book would not have been written. And you? You would not be reading this."

While Koontz's works influenced my early writing, Christal was the one who had introduced me to this books. I had never heard of him, and quite possibly I would never have sought the books out. When it comes to writing, she's been a great inspiration and early on, an excellent critic of how I was writing. If she read my work and thought it wasn't good, she told me, not in an impolite manner. As most early novelists do, we tell and don't show, and since she had read hundreds of books she really knew what worked. So I work feverishly on my craft, doing everything I could to learn how to improve my stories to draw in the readers.

I could write books on the things we've seen and shared during our twenty-three years together. The biggest blessings we've had together are our two children and our grandson. I love her for who she is, and I could never have made it this far in life without her. She's the best friend I have, and I hope we share our journey ahead for many more decades to come.
Posted by Leonard D. Hilley II at 8:17 AM 2 comments: